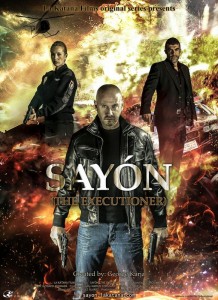 “The special brigade of spanish police are investigating a very unusual suspect. His name is Marko Cattani. A man who acts at the limit of the law, and has its own rules.. Selena Grimm agent is behind the investigative leads, but everything are increasingly tangled and nothing seems to make sense.

There’s nothing more difficult as recognizing the real justice, when you’re inside of hell…

Do you want to enter into the dark world of SAYÓN?…”

“A man returning from a business trip saves a teenage girl from drowning. She disappears a few moment later, leaving the man quite shaken. His girlfriend tries to cheer him up, but she disappears too, when the teenage girl suddenly comes back.”

“Jimmy is convinced he’s found a way to release his inner demons without going against the will of God: Dead Saturday, the time between Good Friday and Easter Sunday, when Jesus is “dead” and our sins are overlooked. But when he confronts Pastor Malcolm, the man who unknowingly inspired the idea, the conversation gets heated.”

“A Canadian Waterline is erected in California’s Central Valley to mitigate a Grapes of Wrath-type drought; meanwhile, Chloe, a 20-something millennial, faces a life-altering decision by her best friend, Kat, and high school sweetheart, Budd.”

“For 50 years, Michael and Betty have been united by one guiding principle: no secrets. But when a provocative Tom of Finland doll triggers Michael’s long-buried desires, Betty discovers that secrets have been part of their life all along. With long-held mysteries thrust into the open, the foundation of their marriage and the path of their golden years is suddenly rocked. Now, they must redefine their future, and decide if it is one their love can survive.”

“A railway station in the middle of nowhere. David is looking for his girlfriend: Willa. They were on their way to their own wedding, when an accident made them stuck at a small railway station. Now Willa is missing and none of the other fellow passengers know where she is. Although the next train is so supposed to come any minute, David leaves the railway station to search for Willa…

For only one dollar Stephen King offers his short stories to film students all around the world. We took this chance and picked the most beautiful and romantic Dollar-Baby: “Willa”.”

A man travels to the US to salvage his heritage and redeem his grandfather’s name.